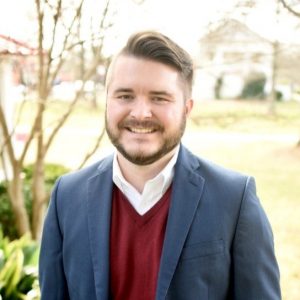 Tyler James is a South Carolina native, growing up in Laurens SC. He attended Anderson University for his undergrad and Clemson University for his MBA. He started his career working for Congressman Jeff Duncan as his Regional Director here in South Carolina for a number of years before entering the finance world in 2019. After 2 years in the industry, Tyler decided to return to the world of government work and begin his career in economic development, something he has always been passionate about. Tyler married his wife Katelin in October of last year and now lives in Seneca.

He is an avid hiker and backpacker and loves spending time in the Oconee mountains and on the Chattooga River. Some of his hobbies include BBQ judging, his is a master judge with the SC BBQ Association, and martial arts where he is a black belt in karate.